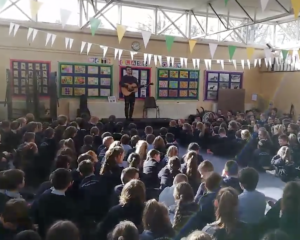 Kildare native Ryan Mc Loughlin (aka Ryan Mack) was previously a member of the boyband Hometown who enjoyed a successful but short career with two number one singles and multiple tour dates under their belts, but when they finished up in 2016 Ryan decided to take a break from the limelight and spent the following couple of years writing and working very hard on his own music.

A past pupil of PPS Newbridge Ryan called in last week. Fresh from his performance on Dancing with Stars, Ryan performed his original song ‘Boston’ for the school at assembly.

Not to be outdone the Patrician boys and girls showed off their talents by singing their version of ‘Dreams’ by the Cranberries with help from Ryan and Mr Tooher.