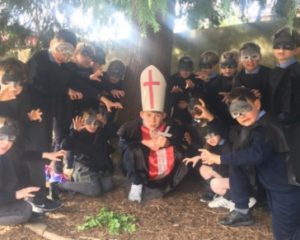 Well done to all the boys and girls of the Patrician Primary who took part in the show’s production of ‘First Bishop’.

The show was an outdoor pageant involving all 377 pupils (and the staff members too) in the school and was based on the life of our local patron saint, St. Conleth. Written and directed by our very own deputy-principal, Frank Kirke, the show depicted Conleth’s early life in a cave, his foundation of a monastery with St. Brigid and his eventual death at the hands of some wild wolves.

The show also demonstrated the school’s famed musical talents with a host of fantastic songs, dances and orchestral performances from members of the school’s brass band.

‘First Bishop’ was the final show from Sir Kirke after over 25 years writing and directing shows in the school.

After months of preparation, the show was a huge success and held over three nights to massive crowds, while over 800 pupils attended the Friday matinee.